Detectives have released CCTV footage of a suspect they want to speak to in connection to a burglary.

On Friday, 19 June, at 8:45pm, an address in Wateringbury Close, Orpington, Bromley, BR5 was burgled.

The 83-year-old victim, was in her home when she heard a bang and was then confronted by a ma.n

The suspect spoke to her and said “do you want any work done?” The victim said no, and the suspect then left the address.

It is believed the suspect may have forced entry via the front door.

No arrests have been made.

The suspect is described as a white male, of a skinny build with balding, brown/ginger hair. He was wearing a light brown jacket, jeans, blue cleaning gloves and a face mask. 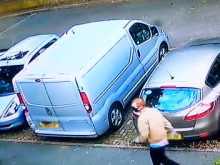 Detective Constable Ben Briselden of Bromley CID, who is leading the investigation, has said: “We have today released CCTV footage of a man I wish to speak to in connection to the burglary and I am appealing for the public’s help to identify his whereabouts.”

Anyone with information is asked to call 101 or tweet @MetCC quoting CAD reference 7705/19JUN20.

View all posts by GAp